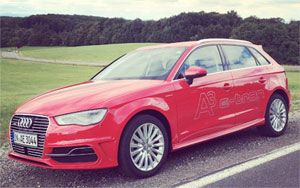 Audi A3 as triple hybrid: The next generation of the A3 will be available as two plug-in hybrid (211 and 252 hp) and a mild hybrid variant by 2018, German Autobild reports. Audi is also thinking about issuing a purely electric model, but only if it would beat the then upgraded BMW i3 in terms of performance.
autobild.de (in German)

Soul with more range: New spy shots of the upcoming Kia Soul EV reveal new lights and air intakes. It is also expected that technological advances will increase its current range of 132 miles, but details have yet to be released. The facelifted model is due by 2018.
autocar.co.uk

Tesla truck? CEO Elon Musk said during an interview with CNN in Hong Kong that a Tesla pick-up is “sort of a logical thing to do in the future.” He did refuse to give any details though.
electrek.co (with video)

Qoros electrification: Chinese Qoros plans to launch a new model which will either be a PHEV or fully electric by mid-2017. It will be the prequel for a whole new platform for hybrid and electric cars set to launch by 2020. A business unit with a focus on electrified models has already been established.
shanghaidaily.com

Lexus RC300h review: Stephen Dobie took Lexus’ hybrid coupé for a spin and offers some comparison to rivalling models. The RC300h “is at its most in town driving” in terms of fuel savings, but since it is a hybrid without a plug, it does not offer much all-electric driving capability.
topgear.com

RAV4 Hybrid review: The updated Toyota hybrid has been reviewed by Richard Webber, who finds it difficult to get the electric motor working alone. Acceleration however is pretty impressive. Yet, the interior and general driving is a bit basic but the RAV4 was never intended to be driven hard.
autocar.co.uk