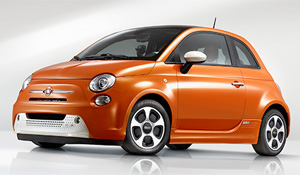 Fiat mulls electric mobility: Fiat-Chrysler CEO Sergio Marchionne seems now ready to consider a fully electric vehicle in his line-up. “I think that to use one of our potential cars as an experiment in this area is interesting,” he said. A small city car for the European market and a Tesla-fighter in the form of an electric Maserati are apparently in the pipeline.
bloomberg.com, autoblog.com

Bye-bye diesel: Volkswagen CEO Matthias Müller is questioning the technology and whether the company “should invest more money in further developing the diesel,” he told German Handelsblatt. Peter Mertens from Volvo is asking himself that same question, saying that the Swedes will have to “think twice or three times about it,” since electric mobility could be financially competitive in the next two years. A new era might be upon us.
spiegel.de (Volkswagen; in German), automobil-produktion.de (Volvo; in German)

Cheap EV for China: Nissan and Dongfeng will launch an affordable electric model in the country this summer. It is said to be 30 percent less expensive than the Venucia e30, the Chinese variant of the Nissan Leaf. According to Nikkei, thanks to subsidise, the newcomer will cost just as much as a petrol-car.
nikkei.com

E-SsangYong update: First specs about the just recently announced EV from South Korea have been released. The E-XIV 300 will apparently boast a 150 kWh electric drivetrain, which could be supplied by BMW. LG will deliver the 43 kWh battery pack that will hold enough energy for 300 km on one charge. A range extender is also up for discussion.
automobil-produktion.de (in German)

Hybrid Porsche wins Le Mans: The Germans drove to the top place on the podium in their 919 Hybrid during the 24-hour race in north-western France. It long looked as though Toyota might be victorious, until the Japanese needed to stop just minutes before the end of the race, due to a technical defect.
autoblog.com, gizmag.com

Solar Impulse 2 takes on Atlantic: The solar-powered airplane has begun its most difficult leg of its circumnavigation of the world. Taking off from the New York, the Solar Impulse 2 will cross the Atlantic on its way back to Europe. The flight will take four days and nights, after which the plane will set down in Seville, Spain.
bbc.com, solarimpulse.com