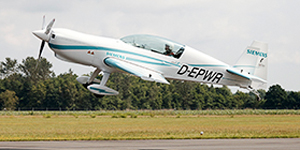 Electric maiden flight: Siemens’s record-setting electric aircraft motor, which reportedly boasts a continuous output of about 260 kW but weighs only 50 kg, has successfully completed its first public flight. This success will allow for the creation of an hybrid-electric aircraft with four or more seats. As the drive is scalable, it will also be at the base of the joint project of Airbus and Siemens for the development of hybrid regional airliners (we reported).
siemens.com

No Brexit for Nissan: The Japanese carmaker is investing 26.5m pounds to continue to produce EV batteries at its manufacturing base in Sunderland, ensuring that some 300 jobs will remain at the lithium-ion battery plant.
smmt.co.uk