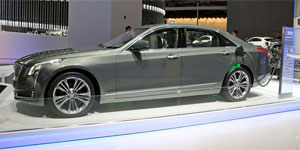 Cadillac launch: The new Cadillac CT6 has been launched ahead of schedule in Berlin and will be travelling to mainland Europe on September 5th. It comes at a starting price of 73,500 euros, but it remains unclear whether the car will be offered in the U.K. A plug-in hybrid version is also in the works.
autocar.com

Opel Ampera-e sighting: Chevy Bolt-inspired Opel Ampera-e has been spotted for the first time since teaser shots were released in February. The mildly camouflaged EV was found testing in Germany.
carscoops.com

Tesla in Taiwan: Tesla has opened a pop-up store in the Taiwanese capital Taipei. The shop will remain in the Shin Kong Mitsukoshi Department Store until August 31st, and a full-scale store is still to come. The Model S online design studio opened in the country last weekend.
electrek.co, chinapost.com.tw

Hybridised sports car: Future iterations of the Ariel Atom could use hybrid power. CEO Simon Saunders also told Autocar that a purely electric version would make sense, suggesting “the Atom will move with the times.”
autocar.co.uk