Electric Mercedes in China: Daimler wants to sell electric cars on the Chinese market under the Mercedes brand. The reason is said to be the electrification of vehicles in higher price segments and government support. The fairly limited success of Daimler’s Chinese brand Denza surely aided with the decision.
reuters.com 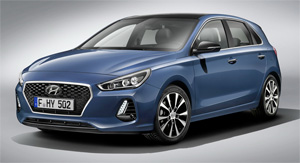 Ioniq under the hood: Hyundai will use the Ioniq hybrid or electric drivetrain for the upcoming i30, as well as to facilitate electrification of other models. In case of the i30, a plug-in hybrid, pure hybrid or even an all-electric version is in the cards. Meanwhile, the carmaker released first images of and data for the i30 ahead of the official unveiling at the Paris Motor Show.
evfleetworld.co.uk (electrification), carscoops.com (preview)

Deutsche Bank provides Tesla funds: The carmaker announced that it received 300m dollars in loans from Deutsche Bank for the former’s direct lease programme. With the loan in its back pocket until September 2018, Tesla will need to raise less capital in another round of financing for the Model 3 production.
reuters.com, electrek.co

New e-up! hits the Isles: The facelifted VW e-up! Can now be ordered for 20,780 pounds after the government’s grant in the UK. First deliveries are scheduled for October. The price of the new generation e-up! Is slightly higher, due to a 500 pound reduction of the OLEV grant.
automotiveworld.com, autocar.co.uk

New Supra in the spotlight: First images of the Toyota Supra sports car remake were snapped during a test drive. The hybrid coupé which was jointly developed with BMW will hit the road in 2018. Despite the regular camouflage, the car’s neat proportions are already apparent.
autoexpress.co.uk

New Lexus concept caught on camera: The UX concept is said to preview the Toyota brand’s upcoming SUVs and will premiere at the Paris Auto Show. Not much is known about the technical aspects of the vehicle, but considering Lexus’ long standing tradition of hybrids, a partially electric drivetrain is in the cards.
autocar.co.uk