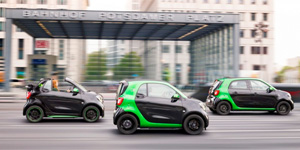 Electric Smart revealed: Just ahead of the Paris Auto Show, Daimler officially presented its Smart ED models. All three variants will feature a 60 kWh motor and 17.6 kWh battery pack now allowing for 160 km of range. An on-board fast-charger with double the charging capacity as the previous version will also come standard, while a 22 kW on-board charger option will be added from 2017. The small EVs will hit European roads early next year.
insideevs.com, mercedes-benz.com

Electric VW preview: Volkswagen is showing first drawings of its electric car study ahead of its presentation in Paris. The front is reminiscent of the facelifted Tesla Model S, while the car is also part VW e-Golf, part BMW i3. Technical details will be released when the Salon de l’Automobile opens its doors.
autocar.co.uk, autoblog.com

Daimler starts with electric SUV: According to German Auto Bild, Mercedes will unveil the EQC in Paris. The five- and seven-seater electric crossover is said to become available in 2019 and be fitted with two electric motors. The 70 kWh battery pack will allow for 500 km on one charge.
autobild.de (in German)

Comprehensive solution a la Tesla? Elon Musk announced on Twitter that the carmaker will presents its combination of Tesla solar roof, Powerwall 2.0 and new charging unit on October 28th. While no further details are known, Musk seems ready to release the next generation of the home energy storage device. And the Tesla Semi is also taking shape. According to Electrek, a number of engineers from Daimler’s SuperTruck programme have joined the EV maker.
electrek.co, twitter.com, electrek.co (Tesla Semi)

Electric Buick for China? According to media reports, GM is looking to release the Chevrolet Volt in the form of the Buick Velite in China. While the Velite will share the same drivetrain components as the Volt, it will be slightly more luxurious. The EV could make its debut at the Guangzhou Auto Show in December.
insideevs.com