China does it quicker: Carmakers hoping to drop ICEs in China have to adjust quickly, as a draft suggests that the country will introduce ZEV mandates. Modelled after California’s legislation, 8 percent of cars are required to be electric by 2018. One year later, 10% need to be EVs and 12% by 2020. If a manufacturer fails to sell enough electric models, it must buy credits from those who cleaned up their act more successfully. China’s latest roadmap accounts for 40% of newly registered cars being PEVs by 2030 as well as for 80m charge points.
sueddeutsche.de (quota, in German), ecns.cn (roadmap)

Next electric BMW will be a SUV: The German carmaker decided that the next all-electric model will be an SUV, Autocar reports citing insiders. Market entry is not scheduled before 2021, as BMW expects electric car technology, including autonomous driving, to develop further first.
autocar.co.uk 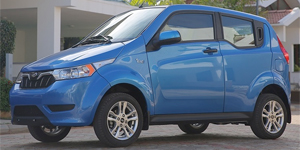 Mahindra looks to electrify across its portfolio. After recently resenting the four-door e20 Plus, the Indian company may offer an electric version of its Scorpio SUV. The focus is on full electrification, not hybrid vehicles, Mahindra says.
hindustantimes.com

Thailand update: Bangkok has officially launched its three-stage EV initiative. Concrete measures include 200 electric buses to serve in the Thai capital by the end of 2017. Within the same period, 100 EV charging stations will be erected, which are part of the up to 800 chargers to be installed by 2036.
bangkokpost.com

Rally Renault: The British take on the French EV is racy. English company eRally presented a Zoe converted for rally competitions as it strives to introduce all-electric rallying for juniors within 2 – 3 years.
autocar.co.uk

UK pricing: Hyundai released prices for its Ioniq. It is now available on the Isles with the hybrid variant starting at 19,995 pounds and the electric version at 24,495 GBP after incentives. Pricing for Toyota’s C-HR hybrid starts from 23,595 GBP.
fleetnews.co.uk (Hyundai), carscoops.com (Toyota)

Before the flood, Kaiyun Motors.