Mahindra electrifies across the board: The Indian carmaker pledged to offer an electric variant for all its models, but falied to give a timeline. Mahindra is also working on a dedicated luxury EV on Tesla level for Italian Pininfarina, Managing Director Pawan Goenka revealed.
asianetindia.com 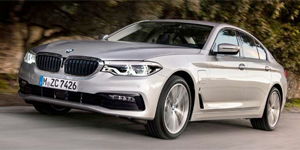 BMW 530e iPerformance specs: BMW will present the new PHEV variant of the 5-series in Detroit this January. Prior to the debut, the company revealed that the eDrive system has an output of 70 kW and enables a top speed of 146 mph. Range is given at 404 miles.
electriccarsreport.com, greencarcongress.com

Panasonic and Tesla are getting ever closer, as the deal to supply solar panels is about to be sealed officially this month. It will see the Japanese supply the Californians and tap into SolarCity’s sales network, as previously reported.
asia.nikkei.com

Swedish design for Tesla: To improve the interior of its electric cars, Tesla hired Anders Bell, Volvo’s former Head of Interior Engineering, who had worked for the Swedish brand since 1998.
electrek.co

Leaked: The next Suzuki Swift will be offered as a hybrid in Japan from next year, a leaked brochure reveals. There will be six variants in total, including two hybrids.
carscoops.com

Hollywood actor for BYD: Leonardo DiCaprio is the new face of the Chinese carmaker’s electric offering. The actor has thus gone from UN ambassador for climate change to brand ambassador in China. Question is, in which role he will have a greater impact.
insideevs.com, sixthtone.com