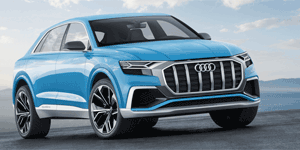 Audi Q8 Concept premiered: The concept SUV, which is being presented at the NAIAS in Detroit, gives an outlook on the upcoming Audi Q8 that will launch 2018. It will be fitted with a plug-in hybrid drivetrain that combines a petrol engine and 100 kW electric motor. The total output is listed as 330 kW (448 hp). The 17.9 kWh battery pack allows for an all-electric range of 37 miles (60 km).
greencarcongress.com, autocar.co.uk, electriccarsreport.com

Honda hybrid: The carmaker confirmed that it will offer a dedicated hybrid from 2018. The name is still unknown, but it will use the same drivetrain as the Honda Accord Hybrid and be built in the U.S. Honda also says it will electrify half of its model range in the coming years, as well as offer a battery-electric and plug-in variant of its Clarity Fuel Cell before the end of the year.
greencarcongress.com, autoblog.com, carscoops.com

Electric Infiniti: Nissan’s luxury brand will add a purely electric vehicle to its portfolio in the next three years, Autocar reports citing CEO Roland Krüger. A prototype is apparently already in the pipelines. All that is known, is that it will be a dedicated model, while technical details have not yet been released.
autocar.co.uk

No victory lab for Polaris: The company is shutting down its Victory Motorcycles brand, but says that the electric Victory Empulse could be made available under a new name. Polaris also confirmed that all “All Brammo patents, technology, intellectual property and Polaris enhancements remain the property of Polaris and will be applied to other product and business units.”
carscoops.com

Camry, take eight: Toyota showed the eighth generation of it Camry in Detroit. Just as the new Prius, the car is built on the Toyota New Global Platform (TNGP) and will be offered with the new THS II hybrid system later this summer.
greencarcongress.com, hybridcars.com

Price tag: The plug-in hybrid variant of BMW new 5-series has now been priced in the U.S. The 530e will be available from 51,400 dollars later this spring.
greencarcongress.com, electriccarsreport.com