VW accelerates its electric drive: Volkswagen wants to triple investment into electric motors as CEO Müller intends to further invest up to 9bn euros in this section through 2022, up from 3bn. The effort includes the development of an hybrid drive destined for the U.S. market. However, this doesn’t mean VW is to refocus its entire business. The group also calculates with a budget of another 10bn euros to further develop combustion engine tech in order to comply with new emission regulation.
reuters.com, electrek.co

Industrial park for PEV: GAC has kicked off the installation of a large industrial park dedicated to development and production of EVs and PHEVs in Guangzhou. On 5m square metres, GAC is to erects an R&D centre as well as a plant with an annual capacity of 200,000 electrified cars. The first construction phase shall be concluded by late 2018, with finalisation scheduled for late 2025. GAC has earmarked more than 45bn yuan ($6.52bn) for the park as it shall feature not only smart manufacturing but also the development of an eco town.
chinadaily.com.cn 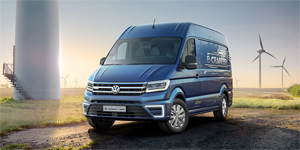 eCrafter to be produced in Poland: After presenting the electric version of its Crafter at last year’s IAA, VW now chose a production facility in Września/Poland. Market entry is still scheduled for the ongoing year, unclear is how many eCrafers are going to be produced.
auto.economictimes.indiatimes.com, wbj.pl

Tesla’s battery update gets cheaper: Updating the 60 kWh version of Tesla’s Model X in order to unlock the full 75 kWh capacity now costs 4,500 dollars. That is 2,000 dollars less than before, but still more than double of what Model S 60 owners pay for the additional 15 kWh. Meanwhile, Tesla CEO Elon Musk met China’s Vice Premier Wang Yang. No official statement on the talks has been issued but it is likely, they discussed Tesla’s planned production in China.
insideevs.com (battery upgrade), teslarati.com (China)

New EV brand in China: Zhejiang Hezhong New Energy Vehicles introduces a new brand for electric vehicles dubbed Hozon Auto. With the production license granted, the manufacturer is building a plant to initially launch 50,000 cars per year from 2019. Its first model is an SUV with wing doors called “@”. Its resemblance to Tesla’s Model X is striking.
carnewschina.com

First photo of Tesla Semi: The first teaser picture of the Tesla truck scheduled for September rather creates curiosity than revealing something.
electrek.co, insideevs.com