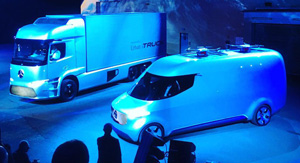 E-mobility goes commercial: Daimler unveiled the Urban e-Truck at the IAA, which can cruise electrically with up to 26t of load on board. Also on display is the third generation Fuso eCanter, which will be launched in a small series by 2017. A year later, Daimler says it will put fully electric buses based on the Citaro into serial production. They will be joined by another fully electric transporter.
automotiveworld.com, daimler.com

More electric commercial vehicles were presented by MAN and Scania in Hanover. MAN’s Lion’s City bendy bus, a study in modular systems, was presented next to the TGE electric truck. An electric bus is to hit the production lines already this year. On display at Scania are both a hybrid truck and bus.
volkswagen-media-services.com, corporate.man.eu (MAN details)

It is Volkswagen’s eCrafter concept, however, that stole the show at the IAA. The transporter boast a 100 kW power output and a 43 kWh battery pack for about 200 km range. Production of the eCrafter is scheduled to begin by mid-2017 but the number will be limited at first.
carscoops.com, automotiveworld.com

Compact H2 bus: Hyundai debuted its H350 Fuel Cell Concept. The hydrogen shuttle is said to last for more than 400 km with a 100 kW power output bringing it up to speed of 150 kph. It has room for 14 passengers but when it could go into service remains unknown.
hyundai.news

Audi Q5 almost there: Amidst all the IAA noise, Audi teases its new Q5 set to premier at the Paris Motor Show. A plug-in hybrid variant is a given with an electric version rumoured at least.
autocar.co.uk