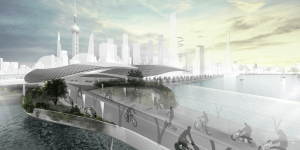 BMW and the Tongji University in Shanghai have created a common visionary mobility concept for crowded mega cities. The project called „BMW Vision E³ Way“ has been initiated by the BMW Group Technology Office China in Shanghai.

The core idea of the concept are elevated roads for electric-powered two-wheelers. The three E’s in the project’s title stand for “elevated”, “electric” and “efficient”. BMW is convinced that such roads are generating new traffic capacity as they are built above existing streets and that their implementation would be simple and economical. “The elevated road (…) provides a fast, direct link between key traffic hubs, making it the perfect alternative for commuters travelling up to 15 km”, the BMW group specifies in its statement. For those who do not possess an appropriate two-wheeler, the concept suggests rental vehicles that shall be offered at each access point.