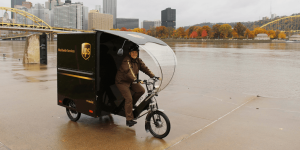 UPS is trialing deliveries with electric bikes and trikes in the streets of London and Pittsburgh. The British capital sees a bike trailer pushed along electrically, while in Pennsylvania it is an e-trike that hauls the parcels.

UPS calls its initiative Cycle Solutions and both the electric trailer and electric tricycle take the company’s “rolling laboratory” approach. These latest experiment in London and Pittsburgh are in line with trials across the globe. Take Hamburg for example, where UPS tested the so-called eBike as early as 2012. Due to its success, the e-trike programme has been extended in the German town since and serves as role model for the eBike scheme in Pittsburgh and Swiss Basel recently.

In London, UPS takes a slightly different approach. The concept electric trailer forms part of the Low Impact City Logistics project and allows couriers to transport up to 200 kilograms without requiring any additional effort on their part. All they have to do is cycle and the trailers will push along through the London borough of Camden throughout December.
The project was enabled by Innovate UK, that brought together consultancy Ferhay, technology developer Skotkonung, the University of Huddersfield and cycle courier specialist Outspoken Delivery to help UPS design and test the final solution.
engadget.com (London), pressroom.ups.com (Pittsburgh)