Jaguar’s testing team has been busy and is now entering the final phase ahead of the global roll-out of the I-Pace set for March 2018. Already 200 prototypes have undergone testing for over 2.5m kilometres since the all-electric concept launched in Los Angeles in 2016.

For the latest test and show off, the British brand went back to California where it took the EV through it paces (pun intended) to determine its range.

JLR wants to electrify its entire lineup reportedly and its seems like its clients are hungry – 25,000 people have reserved the I-Pace ahead of the launch so expect a run once Jaguar opens its order books next spring. In other words, the race is on and will be accompanied by the I-Pace eTrophy that is part of the Formula E season and recently received the first official entry. Jaguar too takes part in the electric racing series as it forms Team Panasonic Jaguar Racing. 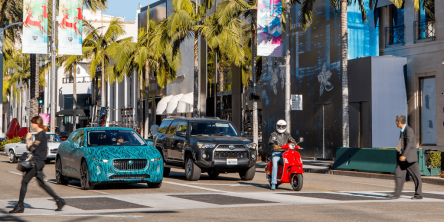 While full pricing will only be revealed in 2018, estimates hover around the 80,000 euro mark. And there are more details drawn from the concept I-Pace unveiled in LA in 2016 such as the 90 kWh Li-ion battery pack. Positioned between two axels it allows for a range of 500 km and two rare earth magnetic electric motors deliver 300 kW and a torque of 700 Nm. The I-Pace is expected to be able to charge at 120 kW if not 150 kW once production kicks off.

Furthermore, JLR CEO Ralf Speth announced that Land Rover may utilise the Jaguar EV platform for its own all-electric version.

NEVS kicks off production of its 9-3 EV in China