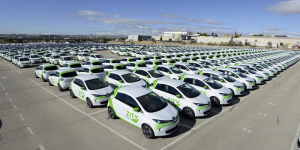 500 Renault Zoe EV are due to arrive in Madrid this month to form a fleet of electric hire cars in Europe’s EV sharing hotspot. The ZITY scheme sees Ferrovial join the French.

Renault together with infrastructure provider Ferrovial progress their plan to install the ZITY EV sharing scheme. Initial plans set the start for early October but now the partners said that the all-electric cars would be due for arrival within this month.

But Renault has in-house competition or maybe mutual support, given that PSA already operates it own electric car sharing programme in the Spanish capital with about 500 Citroen C-Zero vehicles and a 100,000 registered emov users.
On top, Daimler too offers electric cars here as Madrid is one of three cities in which the Car2Go offering is electric only.

All fleets taken together turn the town into a hotspot for EV sharing, a move that has been advanced since the city has declared its central area a ‘Hyper Centre,’  a zero emission zone to take effect from June 2018, when no ICE will be allowed to cross the line. Madrid has also discussed a plan to ban diesel vehicles from the entire city from 2025 recently and carmakers rush to populate the city with electric cars since.

The 500 Renault Zoe within the Zity scheme are equipped with so-called RIDECELL technology with a GSM smartphone connection coupled with a Bluetooth link. That means the EVs can be located even in places with poor connectivity. Ridecell also allows customers lock and unlock the cars using their smartphones.

The new Zoe claims a range of 400 kilometres (NEDC) and Renault estimates about 300 km as realistic for city driving.

Update 17.01.2019: Renault expands ZITY’s fleet. Another 150 Zoe are to be integrated into electric car sharing in the Spanish capital by the end of January.

Vienna is banking on E-Buses by Rampini