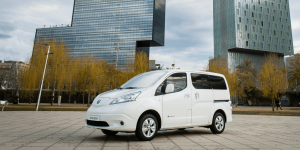 Nissan launched the new electric van with a bigger battery option and has now offered details on pricing and range. The order books will open before the year’s end with deliveries set to start in early 2018.

Following Nissan’s release of the 40 kWh battery pack for the e-NV200 transporter, the Japanese company issued a price list and options. Prices start at 34,105.40 Euro (28,660 euros net) for the box van.

Nissan claims a 60 percent increase in range and so the electric utility vehicle is able to run for 280 kilometres on one charge (NEDC). The larger battery pack does not come at the price of cargo as its size is the same and thus does not effect the load volume that is still at 4.2 cubic metres, while load capacity is at 628 kilos.

Versions now include a box van and the Evalia also known as e-NV200 Combi, a people’s carrier Nissan has recently pledged as zero emission cab in London.
Also on a whole, the alliance of Renault-Nissan and Mitsubishi has been pushing the UV market as it formed a dedicated LCV unit to combine its light commercial vehicle. Apart from the Nissan e-NV200, Renault has marketed its electric Kangoo ZE successfully for years.

The order books for the new Nissan e-NV200 will open before this year ends so that deliveries can start in spring 2018.