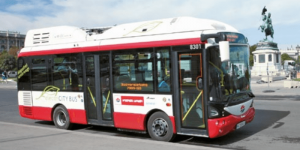 The Italian manufacturer Rampini has been tasked with producing seven electrical Buses for the Austrian public transportation network. The 12-meter buses are planned to be in use by the end of 2018 and will be used on the 4A Line.

This marks the first instance of the Austrian capital looking to employ large e-Buses. As of 2013 smaller models, around 7-meters in length, have been in use on the inner city bus routes 2A and 3A. While today already approximately 85% of public transportation users in Vienna are transported using electric energy, between the various train and bus lines. This move marks a strong dedication to renewable energy use and will cement Viennas’ place as a green city.

As with the previous models, the buses are not only electronically powered, but also have a feedback function built into the brake systems, allowing for up to 25% of energy being brought back into use, says Vienna public transport CEO Guenter Steinbauer. Even AC systems will be run electronically, which is still relatively uncommon, and provide space for up to 63 passengers.
wienerlinien.at (in German)