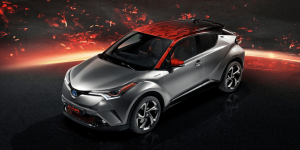 Half of the Japanese carmaker’s global sales shall be obtained through electrified vehicles by 2030. That is what Toyota CEO Akio Toyoda said at a press conference dedicated to the company’s extended battery cooperation with Panasonic (we reported).

In absolute figures, Toyota expects its global sales to reach 5.5m electrified vehicles annually by 2030, among them 4.5 HEVs and PHEVs as well as 1m BEVs and FCEVs.

In this context, Toyota plans to launch its first BEV in China by 2020. Moreover, engineers of the Japanese carmaker are currently developing PHEV versions of the full-hybrid models Corolla Hybrid and Levin Hybrid. So far, the company successfully focussed on the hybridisation of its line-up.

Tech details ahead of the Nio ES8 debut in China