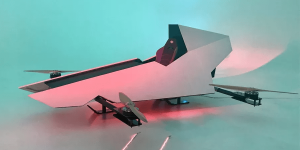 Australian Alauda presents its electric aircraft Mark 1 Airspeeder. And to launch said VTOL, the company made the unusual proposition to set up the very first flying car race in the desert.

Machines that can vertically take-off and land (VTOL) are wished to be the next thing and certainly the hype got fuel when the likes of Google (through Larry Page) and Uber elevated the idea with Boeing. Use cases were laid out for these zero emission VTOLs to serve as taxis but think about it – with air controls so tight that even drones got a problem, it seems a long way off for regulators to allow flying cabs to take off in the midst of an urban sprawl.

Australian start-up Alauda however, sees a very different market for the electric VTOLs – the Outback, known as desert elsewhere, and sports. It built its own scaled-down prototype already, a racecar-shaped quadcopter and plans on testing the Alauda Mark 1 Airspeeder in 2018.

On Kickstarter the firm combined its call for funding with a campaign for the world’s first “flying car” race in 2019. Given that Boeing, Airbus, Uber and various start-ups such as Passenger Drone, the AirQuadOne, or the German e-Volo are all working on such machines, such a race could actually gather quite a few entrants.

On Kickstarter however, the so-called 2018 Airspeeder Race had found 43 backers so far who had only added 5,000 dollars of the 100,000 dollar funding goal at the time of writing, and so the boys from Alauda got a long way to go in the remaining 26 days.