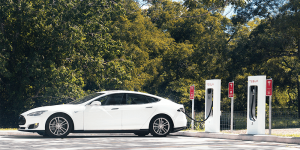 A new “fair use” policy for Supercharger use has gone into effect today in which Tesla forbids commercial clients to charge at its fast-charging stations anywhere in the world.

“Verboten” is the underlying message commercial clients such as cab or fleet operators got from Tesla today as the EV maker published a statement on its legal page that (re-)claims the use of Superchargers for long-distance travel only.

The terms go as far as to threaten Tesla chauffeurs that do not comply with “limiting or blocking your vehicle’s ability to use Supercharger stations” but they are first and foremost asked to “modify” their behaviour.

In detail, the policy asks “that you not charge your vehicle using a Supercharger if your vehicle is being used: as a taxi; for ridesourcing or ridesharing (through Uber, Lyft or similar services); to commercially deliver or transport goods; for government purposes; or for any other commercial venture.”

So this will affect many companies, some of which had done a great deal to promote Tesla and electric driving services such as Tesloop. The small business may be hit rather unfairly as it actually offers long distance travel. If an exception will be made must be seen but Tesla reserved the right to “exclude certain Supercharger stations or occasional trips from the scope of this Policy, such as to accommodate specific local circumstances.”

Also, the policy will just apply to vehicles bought on December, 15 and thereafter. Tesla said it is necessary as charging commercial vehicles has become a problem in some markets with some drivers even leaving them parked overnight. The problem had been addressed exactly a year ago today with Elon Musk announcing the “idle fee” for those blocking a Supercharger after their battery is fully charged.

In the bigger picture, Tesla has been restricting (or charging for) Supercharger use increasingly because not only has the number of Model S and X increased but the Model 3 will add to the global Tesla fleet very soon too. The EV maker plans to extend the network to 10,000 Superchargers worldwide while adding at least the same number of Destination Chargers before the year’s end (we reported). Still, lucky are those that got their Tesla early in the days.