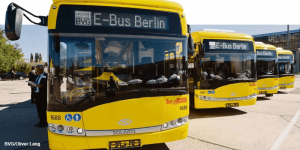 The BVG in Berlin wants to electrify its fleet and has issued a tender to procure 45 electric buses from next year. Planned investment is in the double-digit million realm.

After an announcement of its plan to order a fleet of electric buses this September, Berlin’s public transport provider BVG had issued the tender and also added another 15 buses to the call that has been out since November.

The will to buy follows a successful trial that the German capital had run since 2015 with electric buses by Solaris. The pilot was not without challenges (we reported) but the four buses have since been back on track.

The latest call is for 30 electric single deckers to be ready by 2018.  Another 15 electric bendy buses including charging infrastructure are to follow a year later by 2019. Ramona Pop, who chairs the BVG Board and is Berlin’s Senator responsible for Economy, Energy and Enterprises, expressed hopes that “manufacturers would recognise the sign of the times in order to offer production series vehicles at conditions in line with the market.”

BVG has earmarked an undisclosed investment in the double-digit millions and also joined Hamburg Hochbahn to form a buyers’ community with increased order volumes (we reported).