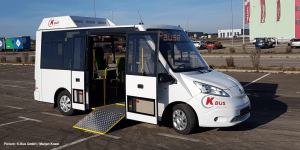 Austrian K-Bus uses a Nissan e-NV200 as the base for its new electric bus that has been certified and delivered to the first customer today. Solar panels serve as range extender.

The utility in the German town of Göttingen, Stadtwerke Göttingen, has taken delivery of an electric bus build in Austria by K-Bus. While the bus is based on Nissan’s electric van e-NV200, the Austrian company has added various technology features and offers two variants.

Solar panels on the roof for example serve as range extender for an extra 4 kWh and have been built by DAS Energy Wr. Neustadt (Diamond Aircraft). Additionally, K-Bus developed an independent CANBUS system (THOREB) to regulate extra features such as air condition independently from the Nissan EV battery. For now, the battery got 24 kWh but shall be upgraded to 40 kWh by 2018 in line with Nissan’s offering.

K-Bus offers its low floor electric vehicle in variant K1 for 9 passengers including a wheelchair user, while K2 can fit 23 people in total. The order books are open and the company says it is already producing more buses.