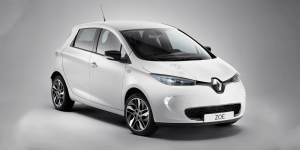 Renault readies its Zoe EV to go to space, at least in spirit. A limited edition now revealed has Star Wars written all over it just in time for the start of the latest movie.

Renault-Nissan got a longstanding promotional relationship with the George Lucas merchandising empire but so far, it had mainly resulted in slightly underwhelming adverts.

However, the limited edition Star Wars Zoe goes further than any other federation, sorry, cooperation has ever gone before. Still, the new twists are mainly visual (and branded) such as the Star Wars logo on the door step so do not expect the little bestseller to hover anytime soon.

Also, the Zoe Star Wars edition is limited to a 1,000 units and will be anything else but interplanetarily or even earthly available as sales are exclusive to France.

Racing in the sky with VTOL by Alauda