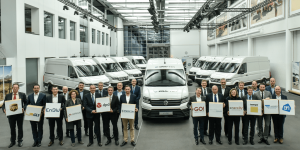 Volkswagen’s utility unit has delivered the first e-Crafters to commercial clients. They will test the new electric delivery van in real-life until mid-2018 before a roll-out later that year.

The first customers to test Volkswagen’s first electric van are carriers such as Hermes, UPS, GLS, and DPD as well as utilities, work men, and retailers. They come from the Netherlands, Great Britain, Sweden, and Germany and all agreed to take part in the 6-month field test that requires the electric vehicles to run between 70 and 100 kilometres a day.

Volkswagen says it had determined above range after analysing more than 210,000 driving profiles of more than 1,500 commercial customers and 85 percent of them drive no longer than 100 kilometres in urban areas.

The e-Crafter has been designed accordingly and lasts for 160 kilometres in city traffic. Power comes from a 35.8 kWh Li-ion battery, the same size Volkswagen has built into the e-Golf but the e-Crafter’s top speed is 90 kph. The electric van plugs into CCS and can rejoice with 40 kW so that 80 percent capacity takes about 45 minutes to recharge.

The battery is in the floor so that the load volume remains the same as in the conventional Crafter that offers 10.7 cubic metres. The e-Crafter got a load capacity between 1 and 1.75 tons depending on the trim selected.

Volkswagen has not named its price and wants to launch the e-Crafter officially in September 2018.