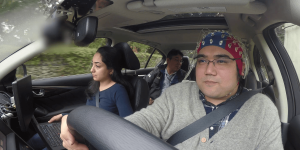 It depends on how one defines autonomy though but the thought-scanner is said to shorten “our” reaction time by predicting our move, or reading the smallest signs rather. Therefore, the B2V uses brain wave technology to determine whether a driver is about to brake, swerve, or perform some other manoeuvre. Nissan says that this “brain-to-vehicle” interface could assist even a semi-autonomous cars to begin those actions between 0.2 and 0.5 seconds faster.

Plans to launch the B2V technology are more vague however with the company speaking of 5 to 10 years until inception and so the concept to be shown at the CES in Las Vegas this week is at the very early stage of development.

Furthermore, the technology to read such thoughts or intentions requires a headset with electrodes attached to the scalp to decipher electrical patterns via electroencephalography, aka EEG. In Nissan’s teaser, the driver is wearing such a headset indeed although it is at least wireless but with neurologists warning about inaccuracy even under medicinal conditions, the safety of the whole operation is at least dubious.

Yet, the thought of controlling a machine simply by thought is tempting. Just be careful what you are wishing for, especially while driving under stressful city traffic conditions. But maybe the car could inject some Zen in that case?!

Dr. Lucian Gheorghe, senior innovation researcher at the Nissan Research Center in Japan, who’s leading the B2V research has had some similar thoughts. For example, the B2V can create a more relaxing environment by altering what the driver sees by using augmented reality. It looks like the future ahead is bright, does it not?