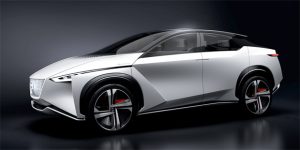 The Nissan IMx is currently on display at the CES in Las Vegas and rather than the concept first shown in Tokyo last autumn, this one is close to the production version.

Daniele Schillaci, Nissan’s executive vice president for global marketing and sales, thus had some news and told Motor1, that the new electric crossover will ride on a “bespoke platform.”

Previous reports had suggested the EV would use the Leaf EV architecture. “Bespoke” does not necessarily mean entirely new though. It could be a longer or otherwise customised version of the Leaf platform. The latter forms the backbone of the group’s ‘Alliance 2022‘ strategy. The plan specifies 12 all-electric models to launch within the next six years, all utilising one EV architecture.

Last night in Vegas, Schillaci would not go into further detail. Nor did he specify an on sale date for the IMx. At its debut in Tokyo, the concept bore two electric motors powered by a mighty battery pack for a range of 600 kilometres. Back then Nissan also used the crossover EV concept to point to its focus on vehicle-to-grid capability, dubbing it a “virtual power plant” that may prove vital in earthquake prone Japan in the future.

Update 03.08.2018: The fact that the crossover concept IMx with dual e-motors will go serial is nothing new. The time plan has been kept in the dark as well. Now head of design Alfonso Albaisa says that the serial version will take “at least two years” before it goes into production.