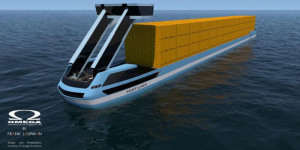 Each of the container ships can carry up to 270 containers and will be supposed to bring them via inland waterways from the Port of Rotterdam to Vossenberg-West in Tilburg. The vessel’s dimensions are 110m x 11.4m. The battery pack’s capacity enables an operation period of roughly 34 hours, it is stored in a container and can either be swapped or charged at a terminal.

Within the next years, Port-Liner intends to build a total of 15 electric-powered cargo ships of different sizes, meant to join ship fleets in the Netherlands and Belgium. The company’s project is supported by the European Union.
heavyliftnews.com