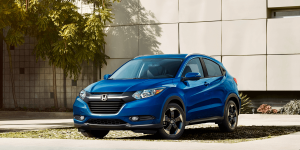 Before the year’s end, the Japanese manufacturer wants to bring an all-electric trio to the People’s Republic, according to a media report. Thus, Honda plans to offer e.g. an electric variant of its HR-V model.

So far, the HR-V exists with a petrol, diesel and hybrid powertrain. China could be now the first country to get offered an all-electric variant of the model that most probably will debut at the Beijing Auto Show in April. Another car likely to be launched in China is an electric version of the XR-V that would exclusively hit the roads in China.

As reported, each and every new Honda model to be launched in Europe will offer some form of electrification, be it hybrid or all-electric. The hybrid Honda CR-V marks the start this year, followed by the Urban EV (we reported). By 2030, Honda wants electrified cars to account for two thirds of its total sales. However, in Europe the carmaker tries to reach this target already 5 years earlier.

Moreover, Honda has teamed up with Hitachi as both companies seek to build EV motors in in the People’s Republic. Production kick-off in a new centre in the Guangdong province is scheduled for 2020. In summer 2017, Honda and Hitachi founded their JV called Hitachi Automotive Electric Motor Systems.
paultan.org