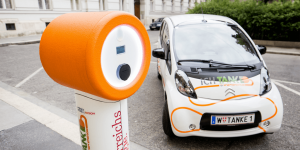 Austrian utility Wien Energie has begun the expansion of its network of public chargers in Vienna. Another 1,000 EV charging stations are scheduled for installation until 2020.

Wien Energie had received the order from the city of Vienna after winning a competitive tender. In order to finance the 1,000 new planned stations, the utility had turned to clients to co-finance the project in exchange for charging vouchers. The Viennese gathered 2 million euros together.

Starting in Vienna’s seventh district, the first ten charging points with 11 kW will be installed this week. Another ten are to follow in the remaining districts each week until summer, when 230 new EV charging stations are set to stand.

The new stops will be open to the public from March, after cabling and certification is completed. Wien Energie already operates 500 charging stations in Greater Vienna.