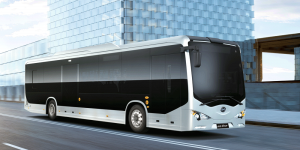 BYD is moving on their plans to begin manufacturing in India for the domestic market by constructing a new production facility in Bidar, Karnataka, which will produce around 1,000 units per year. The facility will cost around 25 million euros.

While the vehicles will initially serve the domestic market, plans include to begin sales of the electric buses to the neighbouring nations as well, according to the Hyderabad-based company.

BYD chose Goldstone as its partner, which has previously produced and delivered a total of 31 electric buses to the transport companies Himachal Roadways and Transportation Corporation and Brihan Mumbai Electricity Supply and Transport Untertaking. The first testing period with the BYD buses was also already conducted in Delhi, Bangalore, Hyderabad, Rajkot and Chandigarh.

Goldstone is also planning to begin producing batteries, next to the buses, and to integrate charging infrastructure as a partner for the transportation companies.