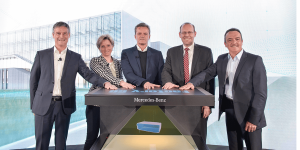 Mercedes-Benz has broken ground in Sindelfingen for the construction of the so-called Factory 56. Daimler praises the facility to become the “most modern” and wants to build electric cars as well as robo taxis here from 2020.

Factory 56 will start producing top of the line EVs such as the next-generation S-Class as well as the first EQ models, Daimler’s electric label, then “made in Sindelfingen”.

For the construction site 700,000m3 earth was moved and about 6,400 tons of steel will be used for the steel construction, almost as much as for the Parisian Eiffel Tower. Nonetheless, Mercedes claims its Factory 56 to be sustainable. Solarpanels on the roof will add energy to the mix. Enough said Daimler, to charge the electric SUV EQC 72,000 times a year with this for example. Overall, CO2 emissions will be reduced by 75 percent compared to today’s S-Class production in Sindelfingen, said Daimler.

Also inside Factory 56, processes are modern and streamlined. The plant is digitised according to Industry 4.0 and is also connected to other productions in the global production network. The so-called 360 degree linkage along the whole value chain connects the suppliers, through to the development department, design and production as well as to customers. In the future, for example, “Digital Anticipation” in the Mercedes me App and online, will allow customers to follow the production of their vehicles while they wait for delivery.

Overall, Mercedes is setting up a global network of production hubs for it all-electric EQ label and batteries. Next to Sindelfingen, there are plants in German Rastatt and Untertürkheim as well as Tuscaloosa in the USA. The selection had not been an easy process but had come to pass over months and through tough negotiations with the workers council (we reported).

China is on board too through BBAC, Daimler’s joint venture with BAIC in China. Last summer, Daimler also announced plans to build up local battery assembly with BAIC (we reported) which will then deliver the battery packs for the first EQ.

Apart from Sindelfingen, Daimler will also complete a second battery factory in Kamenz this year as preparations for the EQC at the Mercedes-Benz plant in Bremen intensify as planned.

Toyota to set up R&D hub for electrified vehicles