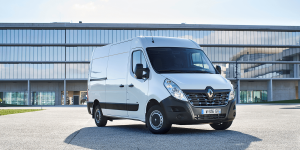 With a slight delay, Renault has issued the price list for its largest electric van, the Master Z.E. in France. Clients must factor in 48,200 euros before taxes and subsidies and exclusive the battery lease.

Renault had set the launch of the new Master Z.E. at the end of last year but has only come round to it now. The electric transporter comes in two versions, the L1H1 and the L2 cab version.

Prices for the latter start at 46,700 euros before tax and battery lease and France’s subsidy of 6,000 euros.

The Master Z.E. L1Hi costs 48,200 euros, again before all taxes, subsidies and exclusive the battery lease. The pre-tax monthly lease rate for the battery is 74 euros per month for an annual distance travelled of 7,500km, plus €0.04 per additional kilometre (equivalent to €8/month per additional 2,500km).

The new 33-kWh battery pack allows for a range of 200 km according to NEDC but 120 km are a more realistic estimate. Especially so as Renault begins to apply the new Worldwide Harmonized Light Vehicles Test Procedure (WLTP) ceritification (we reported).