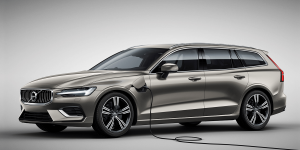 Volvo has released information regarding their new generation of V60 models. The next version of the station wagon will also be released in two different PHEV variant, shortly after the market release of the regular model in summer 2018.

The new T6 Twin Engine AWD with a system performance of 250 kW, as well as a T8 Twin Engine with 287kW should be available before the end of the year. The electric motor supplies an additional 86kW in each case.

Fuel consumption is on average around 2.1 litres per 100 km (NEFZ), according to the manufacturer, and prices for the plug-in hybrid version will be announced over the summer.

At the beginning of the week, Volvo had already announced their plans to release a fully electric version of their XC40. The exact timeline of when this will happen was not announced, however. The planned electric car will likely be based on the compact limousine Concept 40.2 introduced in 2016, as an independent EV.

Volvo is planning to move electric models to the centre of their vehicle lineup, as the announcement came last summer, that every vehicle introduced as of 2019 will have an electric motor, either as a pure electric vehicle, or as a a plug-in or mild hybrid.

Toyota to set up R&D hub for electrified vehicles

New Peugeot 508 to be additionally released as PHEV