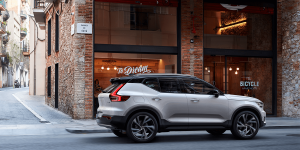 Volvo has announced that next to their plug-in-hybrid, they will also be releasing a fully electric version of their XC40. The manufacturer said this in sort of a side note in their press release regarding the new motors for their compact SUV.

The announcement did not include a release date for the new vehicle, however, we do know that the PHEV will be available towards the end of 2018, thanks to a recent release.

The XC40 plug-in hybrid will be using a three cylinder combustion motor, coupled with the hybrid system. The vehicle is the first of its kind in Volvo’s history, and was specifically designed for PHEV specs. The combustion motor will be coupled with a 55-kW electric motor, to provide an additional 50 km range on the electric system.

The compact SUV is the first model to utilise the new CMA platform, which will build the basis for all future 40 series models by the Swedish manufacturer, including all-electric variants.

Mahindra to invest €113m in EV making in India