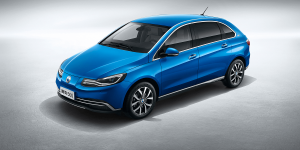 Daimler and BYD have been cooperating on the Denza since 2016 under the banner of Shenzhen BYD Daimler New Technology for the Chinese market. Now their dedicated China EV has received a facelift and a new name tag.

Now known as the Denza 500, the main difference to the previous model is the design. The front is now closed, and if looking for a radiator grille, you will be disappointed. The Denza 500 will be available in two performance varieties. The battery on both versions will have a 70 kWh capacity and will have a range of 451 km, according to NEDC.

The naming of the Denza 500 may allude to additional models being planned. BYD CEO Wang Chuanfu had already hinted as much last September, after which Daimler and BYD commenced investment in their Chinese joint venture.