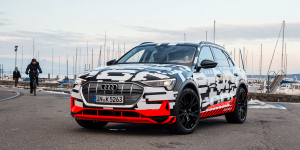 Audi readies its first all-electric SUV to hit the road later this year and the UK joins the growing number of countries that has opened the e-tron order books. Those wanting to buy can leave a 1,000 pound deposit online or at UK stores.

It was down to Audi UK to decide to take orders. The £1,000 deposit towards the first series production EV from Audi can be placed on the UK website or at the stores across the country. Depositors will be enrolled in a so-called Priority Order Members Club, meaning they will be the first to get the opportunity to complete the purchase. Further privileges for deposit holders include regular updates on the car’s journey to the production lines, invitations to preview events and a prize draw to win tickets to the invitation-only Audi Polo Challenge taking place this summer.

The UK follows in the steps of countries on the continent. Norway had started to take reservations as soon as April 2017 (we reported). In Norway, each reservation requires a deposit of 20,000 krona (about 2,150 euros) so British buyers can get a hold on the e-tron comparably cheap. Also dealers in Switzerland, Austria and Belgium have been accepting reservations since.

Audi will launch the e-tron later this year with a range of 500 kilometres (311 miles). The latest marketing efforts position the e-tron as the fastest charging EV through the Ionity network currently under construction across Europe. Audi says the e-tron will have a top speed of 210 kph. Its comparably moderate size positions the SUV between the Q5 and Q7 and so it had been codenamed Q6 when it was still in development.

By now, it is pretty much production ready and Audi has given the e-tron a prime spot in its presentation at the Motor Show in Geneva that is on now.