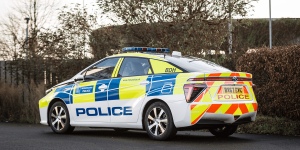 The London Metropolitan Police Service, also known as Scotland Yard, has received eleven Toyota Mirai and already integrated them into their fleet. They will partially be used for undercover as well as official police operations.

The Mirai fleet can currently only be filled at one of five hydrogen charging stations in London.

Neil Jerome, commander of the Metropolitan Police Service (MET), welcomed the acquisition of the fossil-fuel free vehicles in the police fleet. There have been efforts underway since 2015 to begin introducing a more environmentally friendly fleet for the police forces in London. The MET is planning to integrate a total of 550 zero or low emission vehicles by 2020.

German Flixbus to use Yutong E-buses