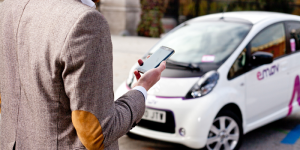 The French are coming to Portugal and carry the electric car sharing service emov as their baggage. 150 C-Zero are to take to the streets of Lisbon this April and shall be free to roam even beyond the capital’s centre.

Citroen says it is the first all-electric car sharing service in Lisbon. True, although DriveNow also operates a fleet in the city but includes also non-electric cars reportedly. In Lisbon, Citroen is to deploy 150 C-Zero, which both residents and tourists will be able to access through their smartphones.

For Citroen’s emov service, it is the second city in Southern Europe after the scheme launched in Madrid in 2016. In the Spanish capital there are now about 500 Citroen C-Zero vehicles and a 160,000 registered emov users.

“In little more than a year, we’ve consolidated the emov service in Madrid,” said Fernando Izquierdo, Chief Executive Officer of emov, “and it’s always been one of our aims to broaden the scope of the project and operate in other domestic and international cities. Right now we’re focusing our efforts on the launch in Lisbon, but we haven’t ruled out the possibility of extending it to another large Spanish city before the end of the year.”

In Madrid, emov will soon deploy its corporate accounts solution. It gives employees of large companies, SMEs and start-ups cost savings of up to 50% compared with conventional car and driver solutions.