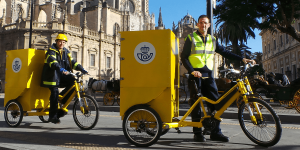 The Spanish mail service Correos is currently testing three-wheeled cargo bikes from Bikelecing (BKL), which are equipped with 48 V systems by Continental. The cargo bikes will be used for an initial three month period in Madrid, Sevilla, Málaga, Cordoba and Granada.

An expansion into further regions and vehicles is considered “realistic” by Correos. The tests will mainly focus on functionality, and every-day-use, and has been underway since January. It is expected to simplify delivery in city centres as well as pedestrian areas.

The electric trikes are equipped with  250 Watt motors and are supposedly capable of carrying around 550 litres of packages and letters. The range is set around 60 km, according to Continental. The bikes weigh a total of 38 kg.

The Spanish mail has been entertaining the idea to employ electric bikes for some time. A year ago, a pilot project involving an electric bike was launched in Sevilla. The current test models, including the continental system, are built upon the experiences made in Sevilla.