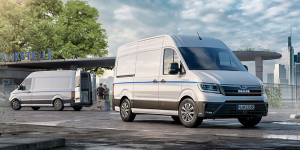 After the example of the VW Crafter, MAN is now planning to release their TGE transporter as a BEV. The MAN eTGE will go into serial production as of July and offer customers a range of up to 160 km.

With the release of the iTGE, MAN is now also setting their sights on more modern transport strategies. The Volkswagen-owned company will be releasing the 100 kW with a load capacity of up to 1,700 kg this summer. The eTGE will be MAN’s first serially produced electrified vehicle.

The battery modules will be mounted in the floor the vehicle and have a capacity of 36 kWh. Regarding the charging times, MAN has stated that a 40 kW charging station can charge the battery to 80% capacity in 45 minutes. At a wall box with rotary current, it takes about five and a half hours for a full charge. Using a 220V AC connection, charging time is estimated at around 9 hours.

The vehicle will be produced in Poland, alongside the eCrafter and the regular Crafter, which provides some background to who will be manufacturing the vehicle. The technology inside the vehicles may also show some similar parallels.

The price for the electric transporter is set around 69,500 euros, and is mainly targeted towards fleet operators who operate within cities, where the 160 km range would be more than sufficient. The first areas to be serviced will include Germany, Austria, Belgium, France, Norway and the Netherlands.