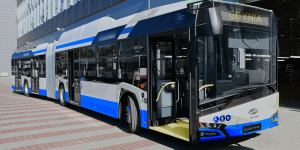 The Polish city of Gdynia has signed an agreement with Solaris for the delivery of 30 trolleybuses, valued at 28 million dollars. The order includes 14 Trollino 12 buses with 58 kWh batteries and 16 articulated Trollino 18 buses with 87 kWh batteries.

Gdynia had previously begun electrifying their public transportation network, which it received recognition for in 2014, with an award from the European Commission, next to cities Lublin and Tychy.

The buses included in the new order will be able to drive “a few dozen kilometers” on purely electrical energy, which will allow for the passage through city sections where there are no overhead trolley wires. The order also includes new lithium-ion batteries, which will replaces the old nickel-cadmium batteries in the 21 older electrified buses.

The modernization will take place this spring, while the new buses are expected to be delivered between September this year and next spring.