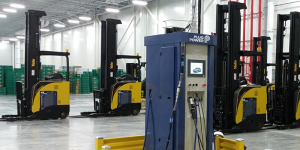 This will enable use in three-shift-systems to only charge twice, instead of the currently widespread triple charge break. The new system will also allow for a significantly faster fueling time than 3 minutes. The first deliveries are scheduled for the third quarter of 2018.

Toyota recently completed its own new hydrogen fueling stations in Motomachi, where 20 electric forklifts have taken up operation. In Canada, Ballard Power Systems has been busy developing air-cooled fuel cell stacks of the next generation to use with forklifts, among other things.