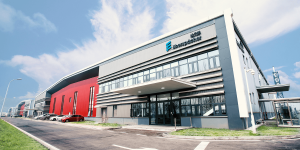 According to the German company, the factory is planned to produce up to one million heaters per year, once it has been fully upgraded. Tianjin is about 100 km southeast of Beijing, where Eberspaecher has their current Chinese HQ. The company has been producing vehicle heaters in China since 2008.

The company released a press statement, saying that “it was less than six months between making the decision and moving in”. The production is set to begin with around 100 workers, which will be doubled within four years, if things go as planned.

The new factory in China will cooperate with the German locations at Herxheim and Hermsdorf, which will also be subject to some expansion. In order to keep up with the rising demand for PTC ceramics for the high voltage heaters, the company purchased land in Hermsdorf recently as well.