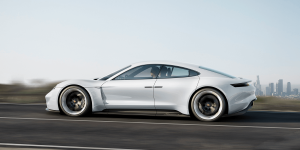 Porsche has begun accepting reservations from Norway for their first electric serial model, the Mission E now called Taycan, which will be available as of 2019. The company revealed the news via an email to people that had registered their interest beforehand.

The company is taking a reservation fee of about 1,900 euro (20,000 NOK), which is refundable in case the customer later decides to drop their order. The purchase price for the Mission E/ Taycan has not been disclosed yet. However, reports have speculated the price to stand around 75,000 dollars but referred to unconfirmed statements.

By starting their sales in EV wonderland Norway, Porsche is following the footsteps of Audi with their e-tron quattro, Jaguar’s I-Pace, Opel and its Ampera-e and Mercedes with their EQC, who also first started their market entrance in the Scandinavian nation.

The Mission E will be constructed as of next year in Zuffenhausen, Germany. 20,000 units are initially planned for the production start.

A prototype has been spotted testing, or better, resting at a fast food drive through.

Meanwhile, Porsche already previewed the follow-up for their debut electric model in Geneva, with the Mission E Cross Turismo. The 4.95 m concept car with four-wheel drive is a mix between station-wagon, sports-car and an SUV.