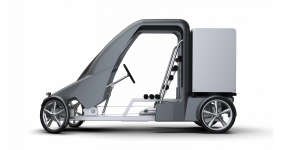 Citkar had presented the Loadster, previously known as Citkar, before but now used the occasion of an logistics conference and festival in Berlin to show its light electric vehicle publicly.

Essentially, the Loadster blends an electric cargo pedelec with functionalities of a mini van. This means, drivers must pedal in order for the electric system built by Brose to add its extra watts. Because of this pedal-assist principle and a top speed of 25 kph, the Loadster classifies as bicycle in Europe, so it does not require a driver’s license and can be driven in parks or on cycle lanes. However, the firm is also working on a speed pedelec version with 40 kph.

Apart from Brose, Citkar has managed to get Magura and Enviolo on board. The startup wants to assemble their Loadster in Berlin’s belt, that is Brandenburg, but is still looking for more investors. Preorders are open though and Kitcar wants to begin building their cargo pedelec before the year’s end. Prices will start around 7,200 euros, indicating a rather professional target group.

A trial with a logistics company is scheduled to start this summer.