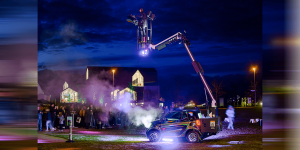 Daimler is ready to party, or at least their youngster, and soon to be all-electric Smart label is. They created what they call their “smart mobile disco” aka a “workstation for DJs” in an attempt to link the brand to club culture.

It is definitely not for a mega clubbing event, the booth Smart made out of their little car. Still, the smart mobile disco that is based on a smart EQ fortwo now accommodates the equipment for operating the lifting platform on which the DJ’s booth is installed.

The booth can be raised and is fitted out with various items of equipment from JBL, smart’s long-standing audio partner, including a mixer console and gooseneck microphone. Obviously there are speakers and lights to project animations onto the dance floor too and it even has a smoke machine.

Whilst laminated side supports stabilise the smart mobile disco when in use for deejaying it is unclear if actual decks for vinyl records are included or if smart relies on digital files.

Bizarrely enough, smart’s move is designed to truly engage with club culture it appears. “The smart mobile disco is a great symbol of the smart brand’s links with club culture – a scene that draws people together, forges bonds and brings joy,” says smart boss Dr Annette Winkler. Little does she know, that ravers travel in packs of more than two usually and rather not drive home from a party, or maybe smart just wanted to host the afters.

There certainly is a showy side to the smart mobile disco, as smart is a global sponsor of the exhibition “Night Fever. Designing Club Culture 1960 – Today”, which will be on show from 17 March to 9 September 2018 at the Vitra Design Museum in Germany. The exhibition has been designed by Konstantin Grcic who evolved the smart mobile disco in the course of this collaboration.