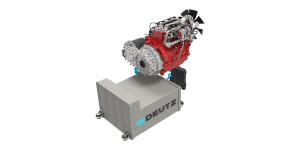 The electrification strategy at Deutz is to combine low-emission engines with electric drives. In the wider perspective, the supplier also holds ownership of Torqueedo and Deutz hopes to use the latter’s expertise in electric boats for its own off-highway applications as well.

The present concept had been announced earlier this year and reportedly utilises battery technology from BMWi which again also powers Torqueedo boats.

The hybrid drive on display in Paris is scalable with power electronics and a battery pack specially designed for this combination. Says the Chairman of the Deutz Board of Management, Dr Frank Hiller: “The power output and capacity of each component can be scaled to meet customers’ requirements. Customers will be able to choose whatever is the optimum combination of conventional and electric drive components for their particular application. Overall, this will increase efficiency and thereby significantly reduce total operating costs.”

The e-motor and diesel each deliver 55 kW, producing a combined maximum system output of 110 kW. The lithium-ion battery has a capacity of 40 kWh at 400 volts. The transmission features a integrated decoupler, so that the drive can run all-electrically. Additional fuel-saving functions such as start-stop or crankshaft starting, and for power takeoffs to run on electricity can be integrated in future.

The E-Deutz system will be available to configure on a tablet at the Deutz booth in Paris.