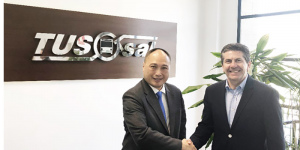 Chinese mega maker BYD says it has received a new order from Spain, where the town of Badalona close to Barcelona is expecting the arrival of 8 electric buses. It is the second order from Spain for BYD as Southern Europe is opening up.

This latest order over eight electric buses comes from Badalona’s public transport operator TUSGSAL. Delivery of the 12-metre EVs is due early next year and it is a first for the operator.

Says Alfonso Suarez, Deputy Director and Secretary of the Board at TUSGSAL: “It will be the first electric bus fleet in Badalona and we are looking forward to next year when we will start operating them.”

For BYD it is the second order from Spain after the Chinese company says it won a tender for electric buses destined for Valencia last year.

However, the company has been active globally and increasingly in (southern) Europe. Portugal is the latest country to fill BYD’s order books reportedly.