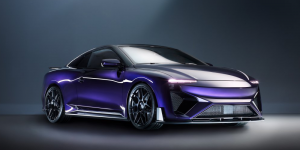 The startup headed by engineer Roland Gumpert has presented a new sport car at the Beijing Motor Show. The RG Nathalie is visually striking, but the real innovation is hiding under the hood.

The four 150 kW electric motors built into the vehicle are not only powered by a 70 kWh battery, but also have a methane fuel cell functioning as a range-extender.

Gumperts title in the company is Chief Product Manager, as well as managing the German sub-brand Grumpert Aiways, which developed the Nathalie. The 4.31 m long and 1.31 m high two-seater was thus born in Ingolstadt. The battery is set in the middle between the seats, as well as behind them, while the methanol tank can hold up to 60 liters and can be filled within 3 minutes.

Currently the Audi TT is being used as a stand-in to prove that the unusual motor system is functional. By the end of next year, the RG Nathalie is expected to go into serial production, by which time the company also plans to offer a “simple solution for methanol supply”. The first round of production will see 500 vehicles leave the factory, at a price of around 420,000 euro.

The electric sports car will find use as a flagship, but only presents the avant-garde for the company: Aiways is planning to offer 8 different electrified vehicles with different chassis by 2019. A factory in Shangrao is already being constructed, and is planned to start churning out 150,000 vehicles per year upon completion, before being doubled. Production of the Nathalie is going to start in Europe, but will be moved to China later on.

The RG in the name refers to Gumperts initials. The former Audi-motorsport boss started a firm in 2004 named GMG Sportwagenmanufaktur Altenburg, focusing on developing and manufacturing sports cars. The company went under in 2014, but was bought up in 2016 by a Hongkong-based consortium and has continued its existence under the name Apollo Automobil. Gumpert left the company in the same year and has found a new sponsor with the 2017-formed Aiway.