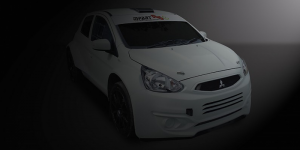 Swedish MPart AB is working on a pure electric version of their rally racer based on a Mitsubishi Mirage. The Mirage R5e will feature two electric motors, one at the front and one at the rear for a combined 250 kW. More details are to follow.

For now, the Swedish company is still working on a prototype of their electric rally car that is to comply with R5 regulations. Their Mirage R5e with its two electric motors is based on the teams existing R5-spec car, which has appeared in series worldwide.

For Mpart director and Mirage designer Tomas Weng an electric version of the car was a natural step: “It was clear to see the direction in which the motor industry was going, so it made complete sense to create a car that could be powered by a variety of different sources: petrol, PHEV [plug-in hybrid electric vehicle] and EV-only.”

For the EV version, they use mainly existing technology and Weng adds that “it’s a fairly straightforward conversion and, if everything comes together, we could have a prototype ready as early as September.”

Mpart is indeed following a growing trend for electrification in rally racing. In the FIA’s WRX world championship for example, only electric cars will complete comes 2020 and FIA is still looking for suppliers for the electric car components such as the battery and soon the chassis (we reported).

In the case of Mpart’s Mirage however, it still hasn’t got an official blessing from Mitsubishi, electric or not. In fact, Mitsubishi has not been involved in high-level rallying since the end of 2005, and manufacturers must sanction any project with the FIA in order for it to gain homologation to compete internationally. So this means the Mirage R5e electric rally car will not race for victory in a FIA race – just yet.